HomeuniversitiesAustralia “singled out” as unsafe and unwelcoming by China, say educators
universities

Stakeholders across the international education sector have condemned an alert from the Chinese government against students travelling to Australia to study as “unhelpful” and “cheap politics”.

About Will Nott
Will trained as a journalist at News Associates after studying English Literature at the University of Warwick. He has worked for the Daily Express, VICE and Newsquest where he was a reporter on the Bromley News Shopper. Will has also worked in online TV, where he directed documentaries. He was awarded a Malcolm Bradbury scholarship to study Creative Writing at the University of East Anglia. When not working, Will enjoys reading, writing, cooking and trips to Cornwall.
“How Australia responds to this issue will likely impact prospective students’ decision to choose it”

In an announcement reminiscent of a 2018 travel warning issued by Beijing, the Chinese government cited cases of discrimination and attacks against China, Chinese and Asians in Australia, urging students to “make proper travel plans and protect themselves from harm”.

Examples of discrimination include Australian politicians and media referring to the coronavirus as a “China virus”, racist graffiti appearing across a number of Australian cities, Chinese and Asian properties vandalised, as well as encountering unjust treatment at the workplace.

“The Chinese government has been responsible in reminding Chinese citizens to make proper travel plans and protect themselves from harm,” said Foreign Ministry spokesperson, Hua Chunying.

“We also advise the Australian side to pay attention to the problems and take concrete measures to protect the security, rights and interests of Chinese nationals in Australia.”

#BREAKING China’s Education Bureau issues its first warning this yr, telling Chinese students to weigh up the risk of choosing to go to Australia to resume study when universities recommence around July. It cites both risk of COVID & ‘racist incidents targeting Asians’ in Aus. 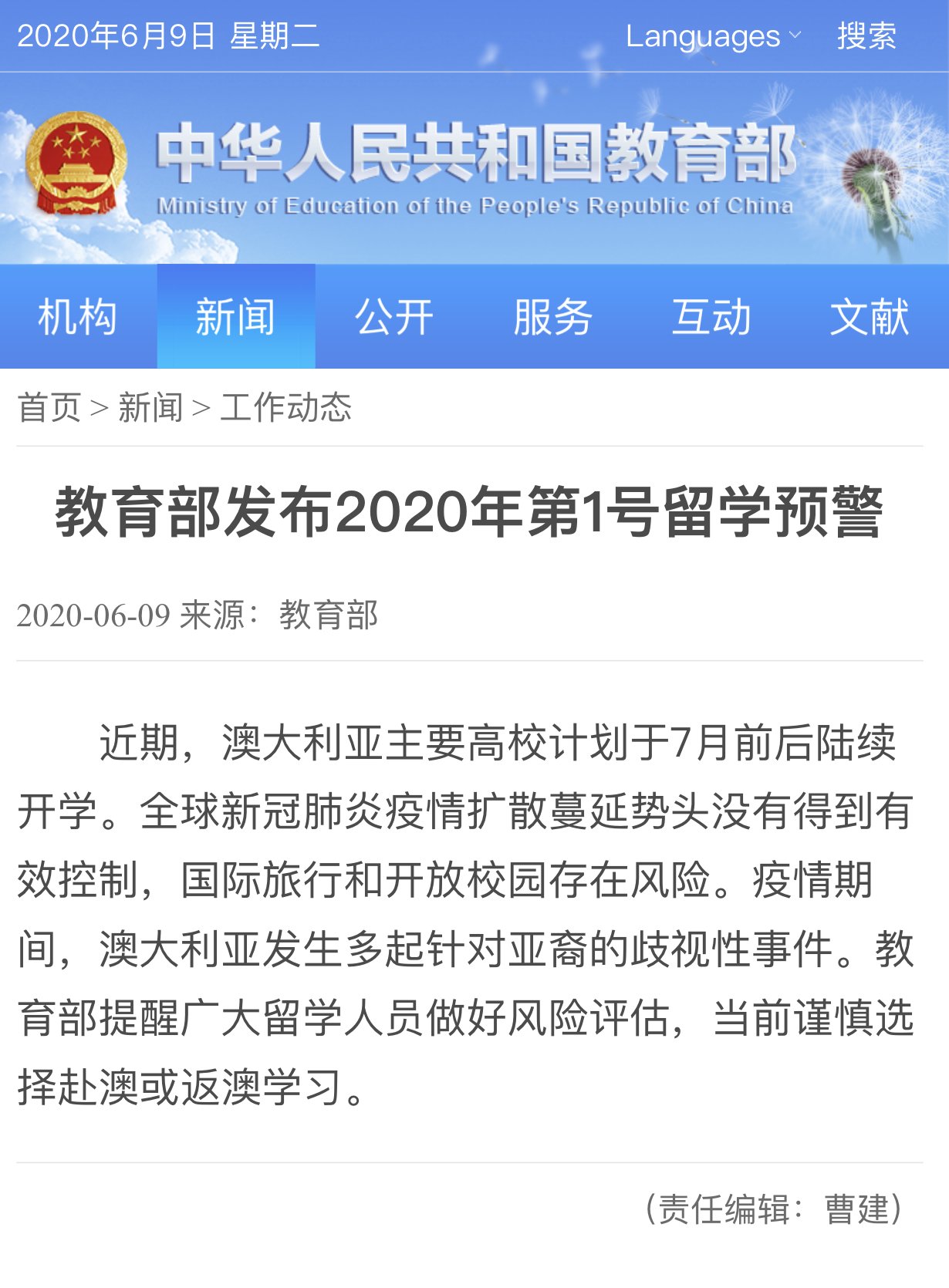 203 people are talking about this

Speaking with The PIE News, Sang Peng, president of agency association BOSSA said they were “surprised” to hear the advisory issued by the Ministry.

“We are eagerly seeking information from educators for related incidents that happened in any specific area or institutes in Australia, to best weigh the reality of the situation,” he said.

However, chair of ISEAA and director at iAE Global, Mark Lucas, told The PIE that the issue with international education is likely to be “collateral damage” from both governments’ recent political falling out over Australia supporting an international probe to investigate the source of Covid-19 in China.

Other industries including tourism and other key trade areas have also been affected, Lucas added.

In a statement sent to The PIE, Universities Australia chief executive, Catriona Jackson branded Australia as “one of the safest places in the world”.

In addition, Australian universities are committed to making it even safer, she explained.

“In 2018, a survey of more than 80,000 international tertiary students found that personal safety and security is one of the top five factors for deciding to study in Australia,” Jackson said.

“Any violent act is taken very seriously and reported to the police.”

The majority of Chinese people see Australia as a country with quality education, health services and overall safety, Lucas agreed.

He added that there have been “isolated cases” of racist attacks, but overall the way Chinese people have been treated in Australia has not changed.

“Apart from the fringe extremists that exist in every country, there is little evidence of Chinese being targeted,” he said, suggesting that Chinese student ambassadors may help to assure prospective students that Australia is safe and welcoming.

Ly Tran, a professor at Deakin University and an Australian Research Council future fellow pointed out that despite the “politically coercive motive” underpinning the Chinese government’s warning, “it’s both an ethical duty and economic strategy for Australia to take urgent action plans to combat racism against international students of Asian heritage”.

“How Australia responds to this issue will likely impact prospective students’ decision to choose it as a study destination,” Tran continued, citing government resources aimed at supporting international student welfare.

However, she continued, Beijing’s warning to prospective students about studying in Australia is “unhelpful” and counters the commitments to strengthen the solidarity of Australia and Asian societies against systemic racism.

In effect, the Chinese government has “singled out and targeted” Australia first among key international education destination markets, she noted.

“In doing so, it’s intended to use this strategy as an implicit warning for other major destination countries if they do not cooperate with China on matters related to Hong Kong, Taiwan [and] independent investigation into the origins of Covid-19.”

The tactic is a “lose-lose game” for both countries, she continued.

“It’s critical for the international education sector, including government and professional bodies and universities, to have a joint effort in addressing the issue at both the policy and action levels, to protect the international student community and educate the community more broadly.”

Managing director of Advisory Centre for Australian Education, Ursula Ng, warned that the travel alert may lead prospective students from China to look for other study destinations, including the UK, Canada, or New Zealand.

The alert was little more than “cheap politics”, she said, adding that focusing on how state and local government have assisted students through the Covid-19 pandemic may be of benefit to the Australian sector.

“The tactic is a lose-lose game for both countries”

English Australia CEO, Brett Blacker, noted that sector bodies have a role to play in on the “practicalities of our messaging”.

“It’s a delicate situation,” he said.

“The feedback that we’ve received historically through our annual or biannual student surveys would indicate that the student experience is positive,” he noted, echoing sentiments from UA.

However, any factors that may deter students from China coming to Australia would be detrimental, he said.

China is the largest source of international students for Australia, generating AUD$12 billion annually for the country’s economy.

Tran at ARC pointed out that in Australia, a roundtable dialogue is scheduled for June 23 to bring the key stakeholders in the sector together to understand the issues for international students and develop action plans.

“Supporting international students’ mental health and empowering them through not only the reporting mechanism but also strengthening their agentive capacities is also crucial,” she added.

How to improve university marketing communications