HomeuniversitiesCambridge is first university to return Benin Bronzes! What about Parthenon Marbles?
universities 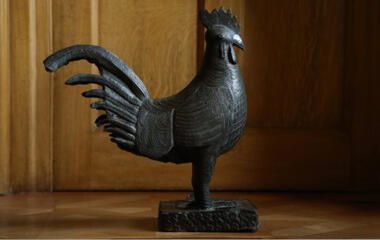 The University of Cambridge’s Jesus College this week became the first institution to officially hand over a Benin Bronze artefact to Nigeria – a bronze cockerel known as the Okukor – one of thousands of artefacts looted by British soldiers from the Royal Palace of Benin in an act of colonial violence almost a century and a quarter ago.

“This is an object of beauty,” said Sonita Alleyne, master of Jesus College, Cambridge, on Wednesday at a handover ceremony in Cambridge attended by Prince Aghatise Erediauwa, who is the younger brother of the Oba of Benin, Nigeria’s High Commissioner to Britain Sarafa Tunji Isola. In attendance was a delegation from Nigeria and Edo State, the former Kingdom of Benin.

“It is an object of meaning, both spiritual and religious,” she added.

“I look at it and I can appreciate its beauty,” Alleyne said. The Okukor has graced formal dinners at the College and held pride of place at functions since it was presented to the College by the father of a student in 1905. “But am I the person who gains the most pride from embracing and beholding its traditional and cultural significance?”

Alleyne, of Afro-Caribbean descent and the first black person to lead a Cambridge University college, recognised the moral imperative of handing back stolen property “without caveat and without conditions”.

“It does not belong to us,” she concluded, as she handed the 16th-century bronze to Abba Isa Tijani, director-general of Nigeria’s National Commission for Museums and Monuments, and invited the prince and the other dignitaries to sign the legal transfer.

The ceremonial handover follows a long period of reflection by the College, sparked at first by two students, who in 2016 started asking questions about the bronze and its provenance. The issue was then broadened, particularly at the time of the Rhodes Must Fall campaign to topple the statue of Cecil Rhodes at Oxford’s Oriel College, to look at Jesus College’s own historical connections to colonial exploitation, imperial violence and the slave trade.

The College set up a Legacy of Slavery Working Party (LSWP) in early 2019, which met to both decide what to do with the bronze, and to examine the legacy of Tobias Rustat, 17th century benefactor, whose gifts to the College in today’s money would be worth at least £500,000 (US$690,000) and who is memorialised in a prominent plaque in the college chapel, where he is buried.

Rustat was also a prominent member of the Royal African Company, which, according to the historian William Pettigrew, “shipped more enslaved African women, men and children to the Americas than any other single institution during the entire period of the transatlantic slave trade”.

The plaque will be moved to a new exhibition room covering the College’s long history and ‘contextualised’ to educate future generations of students and visitors – and his portrait placed in storage, according to the College.

Alleyne acknowledged during the ceremony, that while the College was proud to be the first institution globally to formally return one of the Benin Bronzes, the same Nigerian delegation would travel to the University of Aberdeen in Scotland on Thursday to receive a second bronze, a depiction of an oba, one of the kings of Benin, that Aberdeen University purchased in 1957.

Other institutions such as the Humboldt Forum in Germany were also planning to return much bigger collections of Benin Bronzes. In France, the Musée du quai Branly in Paris will in November return 26 treasures stolen in a similar colonial raid from the Abomey Palace in the Kingdom of Dahomey, now renamed Benin. The treasures include the throne of Behanzin, the last king of Dahomey.

The Benin Bronzes were taken during a ‘punitive’ expedition by British forces, in a brutal sacking of the palace of the Oba of Benin. An expert on the bronzes, Dan Hicks, professor of contemporary archaeology at the University of Oxford and curator at the Pitt Rivers Museum, said it happened at a time when a number of European nations were using looting – and writing about it “in their military handbooks” – as a technique of control.

It was a period between the Berlin Conference of 1884, when European nations carved up Africa between them, and the outbreak of World War I in 1914. “Africa is being subjected to this incredible range of military attack,” Hicks told University World News, and it was deliberate. “This displacement of kings and chiefs and other leaders, and looting is not a side effect of that.”

Hicks said the fact that the Benin Bronzes and other looted treasures were displayed so quickly and distributed across Europe in national ethnographic collections, was evidence of how they were used to reinforce notions of cultural supremacy and the seizure of sovereignty.

At the Jesus College handover ceremony, Prince Aghatise Erediauwa reflected on the violence of the 1897 military attack and the sacking of his ancestor’s kingdom and his ancestral home, the palace of the Oba of Benin.

“So standing here and seeing this object, I know from my family history how far into the recesses of the Oba’s palace and its inner chambers strangers had to get to, to ransack and get something like this. These were shrines that were very, very sacred to the palace and the kingdom.”

Oluwakemi Akinrele, a Jesus College first-year history of art student from Nigeria, invited to address the ceremony, pointed out that the bronzes were a symbol of the strength of the pre-colonial kingdom of Benin and a unifying force for Nigerians today.

“The return of this Benin Bronze hopefully marks the beginning of a period when Britain begins to reconcile itself with its colonial past and Nigeria begins to regain control of its cultural and historical narrative through art,” she said.

“Left in their current institutions, these bronzes represent the worst of colonial era injustices. When returned, they will reinforce pride in a period of Nigeria’s history that remains cherished today.”

Leadership role in returning the bronze

Alleyne’s leadership in paving the way for the return of the bronze was acknowledged by LSWP chair Véronique Mottier, director of studies in human, social and political sciences at Jesus College and a professor of sociology at the University of Lausanne, Switzerland.

“The fact that the Fellowship of Jesus College as a whole were able to have an open and honest conversation over our recommendation is truly to the credit of the courageous leadership of our Master, who oversaw the decision-making process in the very first days of her Mastership,” she acknowledged. Barbados-born Alleyne became Master of the College in October 2019.

Mottier described the archival work and research carried out by the LSWP and students on the history of the bronze, and “the shadows that are cast over our institution today… by the horrific history of slavery and colonial violence.

“We found that the College’s historic papers explicitly recorded in 1905 that the institution ‘agreed gratefully to accept this bronze figure which formed part of the spoil captured at Benin’”, she said, adding that after the donor’s death, at least 128 other artefacts in his possession were sold at auction in 1930.

A reason why the Okukor was presented to the College was that the College’s coat of arms includes three cockerel heads to represent its founding by Bishop John Alcock.

The LSWP had also decided that, while as a matter of law the looting had been legal, it was “important to remember that legal is not necessarily the same as moral”, and returning the bronze was “simply the right thing to do”.

The College’s initiative in returning the bronze could open the way for the return of much bigger collections.

Some of Britain’s regional museums are also considering what do with looted items, but the British Museum in London, which holds the world’s largest collection of more than 900 Benin Bronzes is currently constrained by law, under the British Museum Act of 1963 from returning any items and a change of heart would require a change in the law.

Tijani of Nigeria’s museums commission said he wanted the British Museum to see that it had “nowhere to go” when it saw all these other institutions responding positively to Nigeria’s requests for a return of the bronzes and he hoped Jesus College would back him in lobbying the UK Parliament for a necessary change in the law.

He also said the museums commission would collaborate with Jesus College “in areas of research and capacity building, and areas of joint exhibition”.

According to Oxford’s Hicks, there had been some returns of bronzes as early in 1938, in restitutions overseen by the British Museum itself.

But there had been a backlash, “a concerted effort among museum directors, civil servants, politicians, in the UK, in France, Germany and elsewhere in Europe, to find ways of introducing legal blocks”, and to introduce the excuses still used today.

African societies, we were told, aren’t able to look after artwork “that in some cases they have looked after for 500 years”, he said. Hicks argued that the way the bronzes and other treasures had been displayed alongside items from Ancient Egypt or the Assyrians with the very clear message that “We have blown your living culture back into the Bronze Age. We are displaying images that show your culture is in the past, that it is archeological.”

“The Benin Bronzes really changed the perception that Europeans had of African art,” he told German broadcaster Deutsche Welle in an interview on Humboldt Forum’s plans. Europeans “were fascinated by the sophistication of the work. They were really stunned, astonished, at first by what it meant in terms of metalwork and the very sophisticated technique known as lost wax casting.”

That said, he was profoundly supportive of returning them to Nigeria and the museum being built in Benin City to house them. “We’re talking about righting a wrong,” he said.