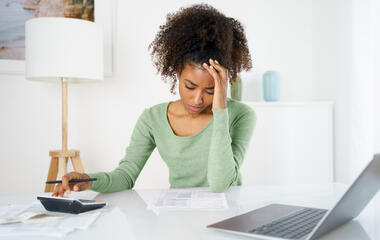 By design, economists’ reports are rather staid, which makes it all the more noticeable that in their 2016 report Black-White Disparity in Student Loan Debt more than Triples after Graduation, written for the New York-based Brookings Institution (BI), Professor Judith Scott-Clayton and Jing Li characterised the US$25,000 loan debt gap between whites and blacks in the United States a few years after graduation as “whopping”.

Since Scott-Clayton and Li’s paper, a series of other papers BI published have shown that the gap, if anything, has grown.

Last June, a paper prepared for BI by Andre M Perry, Marshall Steinbaum and Carl Romer showed that in 2019, 75% of blacks who took out student loans to finance higher education owed more than they had borrowed as compared with 48% of whites.

“And because education does not achieve income parity for black workers, the disproportionate debt black students are taking to finance their education reinforces the racial wealth gap. Today the average white family has roughly 10 times the amount of wealth as the average black family, while white college graduates have over seven times more wealth than black college graduates.”

The debt differential begins as soon as the students write their first cheques. The financial crisis of many black families means that a much lower percentage are able to contribute to their sons’ and daughters’ higher education than is the case for white families.

Some 72% of black students (as opposed to 34% of white students) qualify for Pell Grants. This federal programme provides the very poor with a maximum of US$6,495, roughly one-third of the cost of tuition, room and board at public universities and colleges, and a seventh of the average cost at private colleges and universities.

In their study, Perry et al point out that the black student debt crisis is partially fuelled by the shift from “public funding to tuition-based business models in higher education – all financed with federal student loans”.

According to figures from the American Association of University Professors, between 2009 and 2011 state governments cut their grant for full-time students at state universities and colleges from US$9,124 to US$7,364.

Only in 2019-20 did the state grant equal what it was in 2009. The cumulative financial loss over this period for each full-time student is more than US$7,800. These figures show the reality behind Perry et al’s claim that “the balance (US$1.7 trillion) on the federal books represents the states’ disinvestment from higher education”.

Further adding to the aggregate black student debt is the fact that about 12% of black students enrol in for-profit colleges and universities, approximately twice the rate of whites. This sector has come under scrutiny for predatory practices that target, among others, economically disadvantaged populations such as blacks.

“Despite enrolling only 11% of the higher education population, for-profit colleges and universities receive 25% of all federal student aid … Some of the largest for-profit colleges receive as much as 90% of their total funding from federal aid, incentivising schools to target low-income students and veterans who are eligible for large amounts of federal aid,” wrote William Roberts, managing director for democracy and government reform at American Progress, and Marissa Parker-Bair in an article published on the Center for American Progress’s website in July 2019.

According to Jon Boeckenstedt, vice provost for enrolment management at Oregon State University, “in addition to predatory practices, for-profit colleges and universities have very successfully lobbied the federal government to reduce oversight of their programmes”.

“Further, for-profit colleges and universities tend to have lower graduation rates (26% v 60%) which means that students who took out loans to attend these institutions are unable to benefit from the increased salaries that are expected for college graduates. Historically, default rates for students who don’t finish the degree or programme they started are considerably higher than for graduates,” Boeckenstedt said.

The wage gap between blacks and whites is a significant factor in why black students – both those who drop out as well as those who graduate – struggle to repay their student loans.

In 2019 the US Department of Education reported that one year out from graduation, blacks who hold bachelor degrees earn 10% less than their white counterparts (US$36,000 to US$40,000). In 2020 the New York City Department of Consumer and Worker Protection reported that, for whites and blacks who are further into their careers, the annual salary gap grows to US$21,900: US$64,700 to US$42,800.

Nor does higher education close the gap. A slightly higher percentage of blacks go on to graduate school than do whites (14% to 13%). Yet, wrote Scott-Clayton and Li, “blacks with graduate degrees still earn less on average than whites with only a bachelor degree.”

Equally important for why blacks are less able to repay their college loans is the structure of the federal student loan programme. As soon as a student drops out of college or university, or graduates, the interest clock starts ticking.

Graduate students are given a forbearance from repaying their undergraduate loans for the period of time they are enrolled in graduate school; however, the interest keeps accruing.

The accrual of interest onto the principal debt, what economists call ‘negative amortisation’, is why nearly half of all blacks who took out student loans owe more on their loans than they did upon graduation.

A further factor mitigating against blacks repaying student loans is the direction of intergenerational transfer of wealth in black families.

According to a 2017 study covering 23 years beginning in 1989 and conducted by the Economic Research unit of the Federal Reserve Bank of St Louis (FRBSL), after graduation white students benefit from their families transferring money to them to, for example, put a down payment on a house. By contrast, the FRBSL found that black graduates are much more likely to transfer money to their families to, for example, support their parents, thus leaving less money each month for loan repayment.

Neither the ability of well-off families, which are disproportionately white, to refinance student debt at favourable rates, nor what the income tax act allows former students to deduct from their income taxes, directly contribute to the debt crisis faced by blacks.

They do, however, contribute to the wealth gap between the two groups and, thus, skew perceptions of the issue, leading some to argue that those who cannot repay their debts are the authors of their own misfortune.

Graduates from well-off families benefit from their history of positive credit scores. The interest rate on federal student loans is presently 6.8%. The most creditworthy customers, however, are able to refinance student debt for as low as 1.8%, says Carl Romer, Perry’s co-author.

All former students can deduct US$2,500 of interest charges from their federal taxes. However, as Romer explained to me, the greater benefit goes to those who have borrowed less money. “If your loan is US$100,00 and you are paying 6% interest, then you are paying US$6,000 in interest. But you are still allowed to deduct only US$2,500 in interest. This penalises households with high amounts of student loans, which are disproportionately black households,” he told University World News.

The inequity is even more striking if we look at it over 20 years. Students who can refinance their debt at 1.8% repay the debt at the rate of US$496 a month and pay US$19,150 in total interest. Students whose debts are repaid at 6.8% interest pay US$763 per month and over 20 years pay US$83,000 in interest, or more than four times the amount their peers from well-off families pay.

In their 2016 paper, among their proposals, Scott-Clayton and Li theorised that a ‘Revised Pay As You Earn’ (REPAYE) could alleviate the worst consequences of the racial debt disparities.

Their caveats, including daunting paperwork and the fact that “too often students do not learn about the income-contingent options until after they are already in trouble – having missed payments, accumulated fees and damaged their credit” have proven all too prescient.

“Policy-makers as far back as the Clinton administration were very much influenced by the income-driven repayment plans in place in Australia and the UK,” Scott-Clayton says.

“The difference in both of these cases, though, is that in those countries the plans work much more seamlessly with the treasury and payments are integrated into the tax system. So, this [the American system] is kind of trying to take that model and fit it into the very not automatic US system.”

REPAYE may look fair on paper, having, for example, former students pay 15% of their income towards their debt. Yet, Romer notes, because these households are in such straightened conditions, the presence of, in many cases, decades-old student debt on their credit report means “they are unable to access the type of credit that middle-class households need in order to thrive”.

Nor, Romer says, does the government’s logic make sense. For those who have been paying 15% for 20 or 25 years, the government cancels the debt.

“This is another reason why we say to cancel the debt instead of holding these households really hostage to their student debt for minimal levels of repayment, if any, it is better to just make their lives better by cancelling the debt.”

After underscoring that 51% of the student debt is held by households with zero or negative net worth, and that black households at every income level and at every age are more likely to hold student debt than are non-black households, as had Scott-Clayton, Romer framed the question as a social justice issue.

“They did this study five years ago. So, the amount of student debt has only grown since and it is pretty simple to infer their projection would have grown as well. As we recover from the pandemic-induced recession, it’s important to think about how previous economic studies on the macro-economic effects of student debt have shown that the answer is to cancel it in order to grow the economy,” says Romer.

A few days before I interviewed Scott-Clayton, the Biden administration cancelled the student debt of 323,000 people who together owed US$5.8 billion, which brought the number of former students whose debt the government had wiped out to 455,000 and the amount to US$8.7 billion.

When I asked her about the government’s approach, given that the amount on the government’s books was US$1.7 trillion, Scott-Clayton said: “It is obvious that rather than pushing hard for some kind of blanket forgiveness, they’re trying to do a more targeted approach. And, to the extent that they are committed to that, they’ll keep identifying additional groups that are at high risk of delinquency and default.”

The problem with this piecemeal approach, she says, is that it “won’t reach all the borrowers who urgently need help”.