Education providers should develop online digital strategies to recruit in China, as education agents in the country turn to online recruitment channels throughout the coronavirus pandemic, says one global education consultancy.

According to BONARD – which has surveyed education placement firms in the country –  the beginning of the next recruitment year could start in October, and educators emphasising safety regulations and a welcoming atmosphere for Chinese students will benefit in the years ahead.

These recommendations come as BONARD’s Chief Operations Officer, Igor Skibickij, presented a second iteration of the company’s China agent market report, with the 2020 update sampling 1,500+ agencies between December 2019 – May 2020 in 130 cities in China.

During the coronavirus pandemic agents have realised that they can’t rely on “traditional recruitment methods”, he counselled.

Some 96% of agents said the main recruitment channel was online, followed by 77% saying phone calls, and 58% walk-ins.

“The market is constantly changing and it is still growing”

“Emphasising safety regulations or ‘China friendliness’ in communication and materials further on is a must, especially these days… It matters even more these days than pre-Covid,” he said.

BONARD is “cautiously optimistic” that October may be the point when the pandemic is relatively under control, and restrictions will be lowered, airlines will begin operating.

“Of course, the travel bans are still in place and the quarantine but progressively these regulations might be softened by that time. For educators looking to… plan their calendars for recruitment in China, October onwards could actually represent the start of the 2022/2021 recruitment season,” Skibickij suggested.

“The market is constantly changing and it is still growing,” he explained. While it is “surprising” that the agency market in the country continues to grow, BONARD expects a “fair amount” of consolidation whereby agencies will join bigger companies or B2B networks.

The average age for agencies in China is around 12 years. While the number of agencies established hit a peak in 2017, 2019 saw considerably fewer companies being created, according to the data presented.

“Instead of establishing too much in the Tier one cities or the Tier two cities, which are also becoming very competitive already, the Tier 3 cities are a viable choice for the future,” he recommended, echoing sentiments he made last year, despite the “geographical challenge” of reaching those cities.

Reasons for this include more affordable education, lower saturations of Chinese students, easier to reach logistically.

“The landscape is shifting and traditional destinations are starting to lose a certain amount of market share towards these other destinations, which is certainly good news for Japanese, Korean universities or even European ones.” 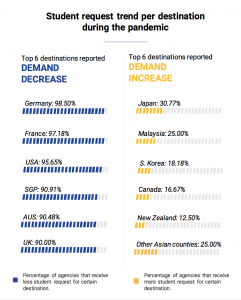 Added to this, in-depth interviews with 35 agencies in response to the Covid-19 pandemic, non-traditional study destinations such as Japan, Malaysia, South Korea and Canada all reported increased demand.

Conversely, at least 90% of the agencies interviewed reported that Germany, France, US, Singapore, Australia and UK received fewer student requests.

Educators who want to “remain serious about recruitment in China” should spend time and budget building a digital marketing strategy, he said.

“The trend will only continue, and the pandemic situation has taught the agents not to be over-reliant on traditional recruitment methods and that they need to modernise and digitalise. So it will actually help educators in their recruitment efforts and agencies co-branding,” he said.

However, institutions should tread lightly, as agents “feel antagonised” when educators turn heavily towards direct recruitment. Around 70% of Chinese students apply for overseas study through agents, according to BONARD.

As with online programs, there is a risk that the value of agents is “watered down”, Skibickij continued.

“They don’t have that much added value for counselling students for online programs if a parent can ask the institution directly. [Direct recruitment] needs to be taken carefully and the educators that have successfully pivoted to online programs need to approach their agent partnerships carefully if they plan to deploy B to C recruitment strategies in China.”

According to the research, online education does not represent a feasible long-term solution, and for students across China the ability to study abroad, immerse themselves, gain experience and adopt a “new way of life” before returning home, remains desirable.

“For those that have the means and have planned for it long-term, we believe that they will remain firmly set in their decision to go abroad as soon as the situation allows.”