Warning: Creating default object from empty value in /home/theunitime/public_html/wp-content/plugins/newsmax-core/lib/redux-framework/inc/class.redux_filesystem.php on line 28
 Colleges Slash Budgets in the Pandemic, With ‘Nothing Off-Limits’ - The University Times

HomeuniversitiesColleges Slash Budgets in the Pandemic, With ‘Nothing Off-Limits’
universities

Colleges Slash Budgets in the Pandemic, With ‘Nothing Off-Limits’

Ohio Wesleyan University is eliminating 18 majors. The University of Florida’s trustees this month took the first steps toward letting the school furlough faculty. The University of California, Berkeley, has paused admissions to its Ph.D. programs in anthropology, sociology and art history.

As it resurges across the country, the coronavirus is forcing universities large and small to make deep and possibly lasting cuts to close widening budget shortfalls. By one estimate, the pandemic has cost colleges at least $120 billion, with even Harvard University, despite its $41.9 billion endowment, reporting a $10 million deficit that has prompted belt tightening.

Though many colleges imposed stopgap measures such as hiring freezes and early retirements to save money in the spring, the persistence of the economic downturn is taking a devastating financial toll, pushing many to lay off or furlough employees, delay graduate admissions and even cut or consolidate core programs like liberal arts departments.

The University of South Florida announced this month that its college of education would become a graduate school only, phasing out undergraduate education degrees to help close a $6.8 million budget gap. In Ohio, the University of Akron, citing the coronavirus, successfully invoked a clause in its collective-bargaining agreement in September to supersede tenure rules and lay off 97 unionized faculty members.

“We haven’t seen a budget crisis like this in a generation,” said Robert Kelchen, a Seton Hall University associate professor of higher education who has been tracking the administrative response to the pandemic. “There’s nothing off-limits at this point.” 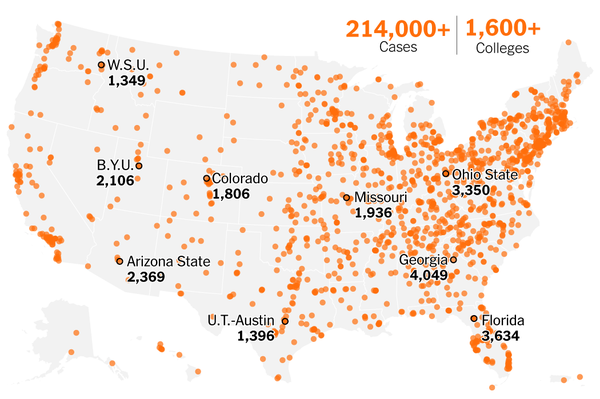 Tracking the Coronavirus at U.S. Colleges and Universities

Even before the pandemic, colleges and universities were grappling with a growing financial crisis, brought on by years of shrinking state support, declining enrollment, and student concerns with skyrocketing tuition and burdensome debt. Now the coronavirus has amplified the financial trouble systemwide, though elite, well-endowed colleges seem sure to weather it with far less pain.

“We have been in aggressive recession management for 12 years — probably more than 12 years,” Daniel Greenstein, chancellor of the Pennsylvania State System of Higher Education, told his board of governors this month as they voted to forge ahead with a proposal to merge a half-dozen small schools into two academic entities.

Once linchpins of social mobility in the state’s working-class coal towns, the 14 campuses in Pennsylvania’s system have lost roughly a fifth of their enrollment over the past decade. The proposal, long underway but made more urgent by pandemic losses, would merge Clarion, California, and Edinboro universities into one unit and Bloomsburg, Lock Haven and Mansfield universities into another to serve a region whose demographics have changed.

Such pressures have reached critical mass throughout the country in the months since the pandemic hit. State governments from Washington to Connecticut, tightening their own belts, have told public universities to expect steep cuts in appropriations. Students and families, facing skyrocketing unemployment, have balked at the prospect of paying full fare for largely online instruction, opting instead for gap years or less expensive schools closer to home.

Costs have also soared as colleges have spent millions on testing, tracing and quarantining students, only to face outbreaks. A New York Times database has confirmed more than 214,000 cases this year at college campuses, with at least 75 deaths, mostly among adults last spring, but also including some students more recently.

Freshman enrollment is down more than 16 percent from last year, the National Student Clearinghouse Research Center has reported — part of a 4 percent overall drop in undergraduate enrollment that is taking tuition revenue down with it.

In a letter to Congress last week, the American Council on Education and other higher education organizations estimated that the virus would cost institutions more than $120 billion in increased student aid, lost housing fees, forgone sports revenue, public health measures, learning technology and other adjustments.

And because donations to all but the heftiest endowments limit those funds to specific uses, most colleges cannot freely dip into them as emergency reserves. Harvard has the largest endowment in the nation, but its pandemic losses turned a $300 million-plus surplus in 2019 into a $10 million operating loss in 2020, according to an annual report posted last week, forcing the university to freeze hiring, slash capital spending and cut senior managers’ pay.

That has meant months of cutbacks, including abolishing athletic programs, deferring campus construction and laying off administrative staff and cafeteria workers. Scores of graduate programs, including some at elite research universities such as Harvard, Princeton and U.C. Berkeley, have temporarily stopped taking new Ph.D. students — the result of financial aid budgets strained by current doctoral candidates whose research is taking more time because of the pandemic.

A Chronicle of Higher Education database tracking the budgetary triage has documented more than 100 such suspended programs, from the University of Pennsylvania’s School of Arts and Sciences, which will not take new school-funded doctoral students next fall, to Rice University, which paused admissions to all five of the Ph.D. programs in its school of humanities.

Most of the suspensions are in social sciences and humanities programs where the universities — rather than outside funders such as corporations, foundations and the federal government — typically underwrite the multiyear financial aid packages offered to doctoral students. University officials say the suspensions are necessary to ensure their strapped budgets can continue supporting students already in Ph.D. pipelines.

But Suzanne T. Ortega, president of the Council of Graduate Schools, noted that interrupting that pipeline could also have a lingering impact on the higher education work force, diverting promising students from low-income households, for example, or discouraging candidates who might bring much needed diversity to faculty rosters.

As it is, the pandemic has had an outsize impact on less affluent students: A survey of 292 private, nonprofit schools released this month by the National Association of Independent Colleges and Universities reported a nearly 8 percent decrease in enrollment among students who receive federal Pell Grants.

“A couple years off is not necessarily the end of the world and may even be a wise thing,” Ms. Ortega said. “But if our universities don’t remain in touch with those students, and connect with them, and encourage them to keep thinking about grad school, we could have our own lost generation of students who get busy with other things and then don’t fulfill their dreams.”

As schools exhaust the possibilities of trims around the margins, what is left, administrators say, is payroll, typically the largest line item in higher education. Since February, when the coronavirus hit, the Bureau of Labor Statistics has reported that colleges and universities have shed more than 300,000 mostly nonfaculty jobs.

“Some of these institutions have redone their budgets three, four, five times,” said Jim Hundrieser, vice president for consulting and business development at the National Association of College and University Business Officers, a professional organization for finance officers in higher education.

“As this next chapter unfolds, what’s left is just staffing. For most, this will be the toughest round.”

But, Ms. Cornish said, further action was needed to bring the payroll into line with enrollment declines.

Ohio Wesleyan’s president, Rock Jones, told students in a recent email that the university would eliminate or phase out majors in comparative literature, urban studies, journalism and 15 other subjects. The move, he wrote, would merge religion and philosophy into one department and lump Black studies and women’s studies into a single “critical identity studies” program, but also will save about $4 million and limit faculty layoffs to one tenured post.

“Even if the faculty can stay on,” he said, “they’ll get reassigned, maybe to teach in another department or do administrative work.”

Other schools are laying the groundwork now for cuts they expect later. Trustees at the University of Florida took the first step in September to allow faculty furloughs to help close a projected $49 million shortfall from the coronavirus. Steve Orlando, a university spokesman, said the next step — a formal furlough policy — is expected to come to the board this year.

Daniel Meisenzahl, a spokesman for the University of Hawaii, said the 10-campus system had embarked on an exhaustive fiscal review in which “every single unit” was being examined, including an array of bachelors’ programs and university centers for public policy and conflict resolution. The system is facing a projected 13 percent decline in revenue and a net loss of nearly $67 million in operating income.

Mr. Kelchen said that the coronavirus had worked its way into the core of the nation’s academic machinery, and that the damage would likely be lasting.

“These cuts are going to continue long past the pandemic,” he said.

Source:NY times
Share on FacebookShare on TwitterShare on PinterestShare on LinkedIn Share on TumblrShare on RedditShare on VKontakteShare on Email

What is the role of universities in global upskilling?