International students studying in Western Australia contributed AUD$2.1 billion to the economy in 2019, according to a new report by StudyPerth.

About Callan Quinn
Callan first began her media career in China with the expat magazine City Weekend. After travelling around Australia and New Zealand, she went on to launch an NGO-focused magazine in Somaliland and later worked as a freelance editor for China Daily. She has also lectured at Frantz Fanon University and Tianjin Polytechnic on academic English and cross-cultural communication.
International students spent AU$228m in WA’s retail sector last year

“For every int’l student enrolled in WA, $39,417 is contributed to the state’s economy”

“When the contribution of visiting friends and relatives is also included, is it estimated that the 53,404 international students studying in Western Australia contributed $2.1 billion to the WA economy in 2019,” explained the report.

“Based on these results, it is estimated that for every international student enrolled in WA, $39,417 is contributed to the state’s economy.”

According to the report, sectors such as retail, finance and insurance, and transport, postal and warehousing saw contributions from international students hit AU$228m, AU$92m and AU$105m respectively, with mining accounting for AU$16.5m in revenue.

“Visiting international students who invest in our state are attracted by the lifestyle, safety, amenity and long term capital growth prospects,” said Sandra Brewer, executive director of the Property Council of Western Australia.

“Beyond contributing to the thousands of direct and indirect jobs in the property sector, international students and temporary migrants add to the vibrancy and viability of the places they inhabit.”

Overall, explained the report, WA’s export revenue from international education has increased 51% from its most recent low in 2012-13.

But despite increases in the number of students, the popularity has not grown as quickly as other Australian territories and states.

The report called the 70% increase in student numbers from 2005 to 2019 (for a total of 53,404) “healthy”, but noted it did “not compare favourably against the trends nationally where total international student enrolments rose by 176% over the same period”.

“Between 2005 and 2019, total international student enrolments in Western Australia have increased by 4.2% per annum, which was the lowest annual rate of growth of any state or territory,” the report highlighted. 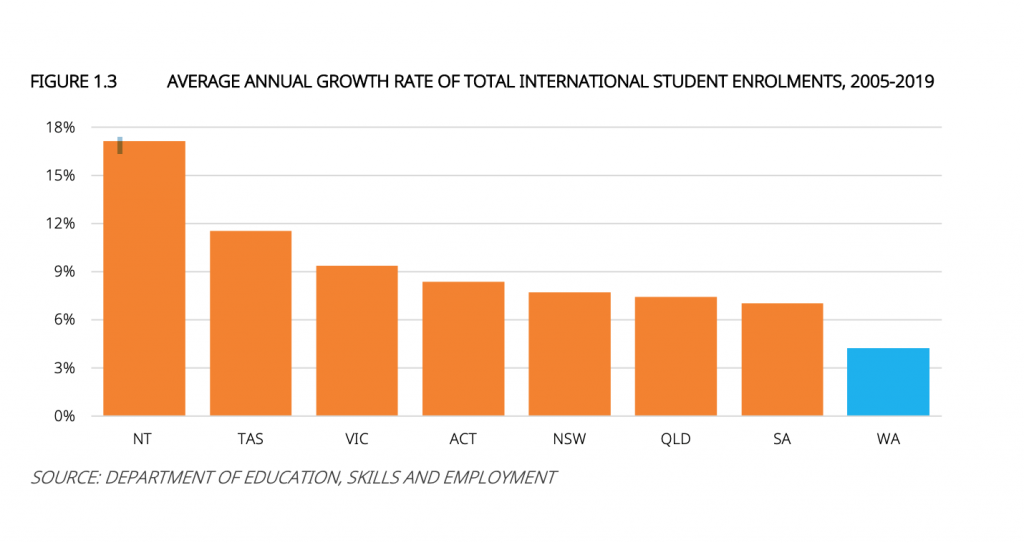 The StudyPerth report also broke down how much money is generated by source market.

The two largest source markets for WA are India and China, which account for 16.7% and 15.7% of total international student enrollment, respectively.

But apart from its economic contribution, the international education sector has also been a major catalyst for soft diplomacy which has benefited both the state and the nation, said chief executive officer of the International Education Association of Australia, Phil Honeywood,

“Western Australia’s universities and its other education providers continue to imbue overseas students with our western democracy inspired ideals, ethics and “can do” multicultural spirit,” he said.

Various measures have been introduced across the state to assist international students caught in the crossfire of the coronavirus pandemic, including StudyPerth Crisis Relief program and an International Student Meals initiative.

Although a ban has been in place on entering the country over the last few months, last week the Australian government announced a pilot program to begin enabling students to return from July onwards.

Turkey is isolated from Europeans and Arabs like never before