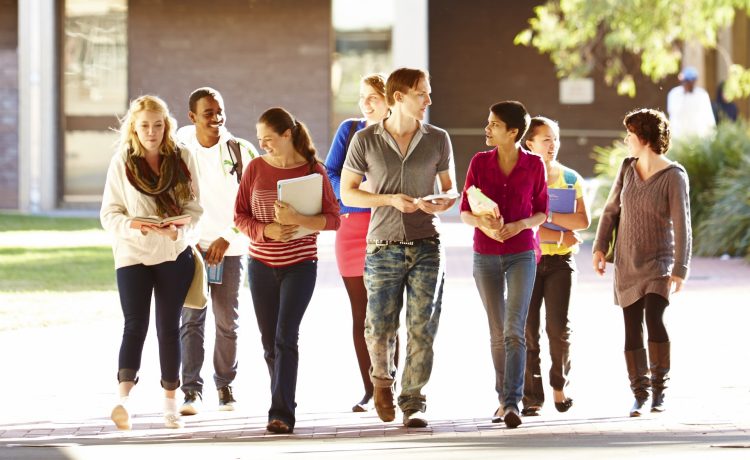 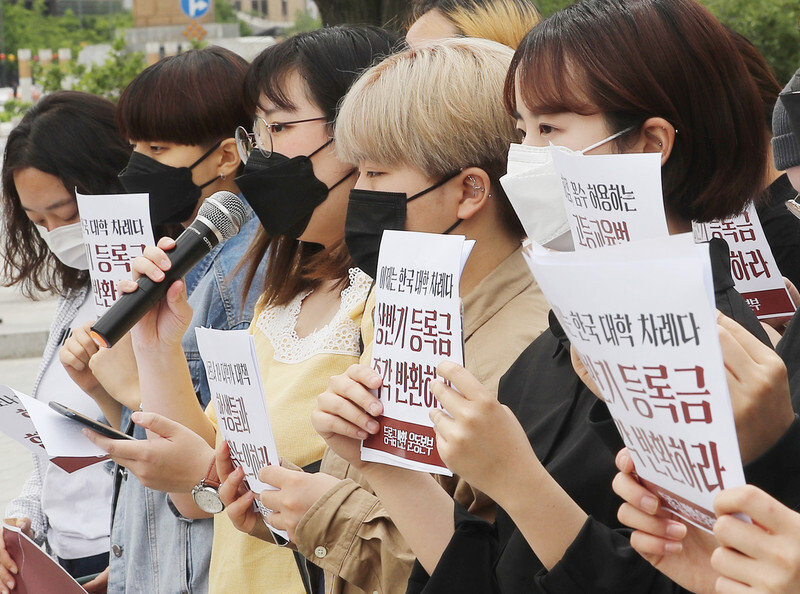 Students under the Campaign Headquarters for Tuition Reimbursement gather outside the Central Government Complex in Seoul to demand tuition refunds on May 14. (Yonhap News)

University students announced plans to take legal action against universities and education authorities for violations of their “education rights,” including the substitution of on-campus classes with online ones as a result of the novel coronavirus outbreak.Campaign Headquarters for Tuition Reimbursement, an association of university student councils and other groups, held a press conference in front of the Central Government Complex in Seoul on the morning of May 14 to announced that it was “taking legal action for the reimbursement of tuition and launching a petition to amend the Higher Education Act and laws in connection with rules regarding university tuition.”“With the cancellation of events, replacement of classes, and inability to use facilities, three million university students nationwide have been denied rights corresponding to the tuition amounts set by tuition review committees, yet no measures whatsoever have been taken over the past four months, and there has been no response to the students’ demands,” the headquarters said. Its members plan to begin recruiting plaintiffs on May 18 to file suit against individual universities and the Ministry of Education (MOE) in late June. In the lawsuit, they plan to request the reimbursement of a portion of tuition fees as “improper gains” and damages resulting from “default.”The students’ argument is that it is unreasonable to charge the same amount of tuition even after universities have adopted measures such as replacing in-person classes with online ones due to the virus outbreak. While some universities have begun providing “special financial aid,” the students maintain that there needs to be an unambiguous return or reimbursement of the tuition fees that have already been paid. The findings of a survey of 21,784 students at 203 universities nationwide conducted last month by the University Student Council Network showed 99.2% of them agreeing that “tuition should be reimbursed.”Regarding the means of repayment, 87.4% said it should be a “return/reimbursement of tuition fees already paid.” Many respondents called for “payment in proportion to the amount of tuition submitted” (54.3%), stating that an appropriate reimbursement amount would be “half” (55%).Noting that past measures such as the abolition of school support fees and matriculation fees were “the result of legal action by students,” the Campaign Headquarters for Tuition Reimbursement said, “Not just in South Korea but in the US, students at over 50 universities have begun taking legal action and pursuing online petitions, while some 250,000 students in Great Britain have been demanding the reimbursement of tuition and dormitory costs.”“Kyoto University of the Arts in Japan and some universities in the US states of Iowa and Wisconsin have decided to respond to student demands by reimbursing a portion of tuition fees,” it added.In addition to their lawsuit to have tuition reimbursed, the students also said they plan to pursue changings to the legal system, including the lack of clear provisions on tuition reimbursement in the Higher Education Act and rules on university tuition.“Universities are gaming us by taking advantage of blind spots with the legal system’s lack of clear tuition exemption and reduction regulations,” said Lee Hae-ji, director of the University Student Council Network’s executive committee.“We plan to conduct a signature campaign to amount the law and set this right.”

Source:Hani
Share on FacebookShare on TwitterShare on PinterestShare on LinkedIn Share on TumblrShare on RedditShare on VKontakteShare on Email

Restrictions ease but remote learning still the norm at universities